If the gunslingers from the Wild, Wild West had been baseball players instead of plying their trades at the OK Corral, it might have looked a lot like the first seven innings of Thursday night’s game at the Bank.

With Cy Old, Pedro Martinez dueling against Cy Young, Tim Lincecum, the OK Corral imagery worked in the most austere sense, however. In fact, after Pedro struck out the side in the third inning to register his seventh strikeout against the first 10 hitters he faced, he strutted off the mound as if he were going up against the Yankees at Fenway 10 years ago.

So when he strutted off the mound at the end of the third with his eyes narrowed and right arm dangling at his side as if it were some sort of weapon, it was as if he were saying to Lincecum, “There you go, kid. Your turn.”

And Lincecum, a pitcher in whom Pedro saw a lot of similarities with, answered.

Both pitchers lasted seven innings and combined for 20 strikeouts and one walk. Pedro got nine whiffs and no walks while Lincecum got the other 11 and the walk. Perhaps the only real mar on the game was that because it was so close, both pitchers had to come out after seven innings for pinch hitters.

Nevertheless, Pedro vs. Lincecum was pure artistry. Call it the old master dialing it up to show the next big thing how it works. And yet though Pedro might go down as the right-handed version of Sandy Koufax, he looked at Lincecum as an heir of sorts. There they were, two narrow shouldered righties throwing heat and breaking off knee-buckling changeups in the middle of a tense September pennant race.

Yes, there were plenty of subtle fist pumps from the pitchers after big outs to go around.

“Kind of flashes back from the good old times,” said Pedro, flashing a smile after the game. “As you know, I don’t have the same power I used to have, but I’ve always said it’s not about power. It’s about hitting the spots and knowing what to do with it.”

Ah yes, the good old days. That was back when Pedro won three Cy Young Awards and should have had a fourth had it not been for some suspect voting. Regardless, Pedro also acknowledged that facing Lincecum fired him up a bit like those old days when he faced Roger Clemens or Randy Johnson in big-time games. That was especially the case after Eugenio Velez smashed the first pitch of the game into the right-field seats.

“That isn’t going to help you against a guy like Lincecum,” Pedro said. “That game could easily have finished 1-0 with the stuff he had.”

Then, with two outs in the sixth, Linecum plunked Chase Utley high on the right shoulder which set the table for Ryan Howard’s game-winning RBI double.

Still, Pedro was impressed with his mini-me.

“He’s amazing,” Pedro said about Lincecum. “He reminds me a lot of me, only twice as better at the same time in the big leagues. This is his second or third year, right? Yeah, he already has a Cy Young.”

The feeling was mutual for Lincecum toward his fellow 5-foot-11 right-handed Cy Young Award winner and two All-Star Game starter. Pedro had always been a model for the Giants 25-year-old stud, who is only in his second full big league season. That even goes for Thursday night’s classic where Lincecum watched just as intently as the 45,000-plus in the seats. Watching, the Giants’ ace knew that the first pitcher that blinked was going to lose.

“I used him as an example of guys who had great careers and put up pretty phenomenal numbers considering their lack of size,” Lincecum said.

“Just to get to see what kind of stuff he has and it’s just ridiculous how nasty it still is today. You can see that he knows what he’s doing and he’s not just winging it up there hoping that he’s getting outs. He’s pitching with a purpose. He knows how to get guys out and that was apparent in the first three innings.”

That’s exactly how manager Charlie Manuel saw it, too. Though they traveled in similar circles during the Indians’ glory years where Manuel was the hitting coach and manager and Pedro was putting together his seven-year epic streak for the Red Sox, the manager and pitcher didn’t really know each other.

Truth is, Manuel doesn’t much like talking about the days Pedro stuck it to him and the Indians, especially that deciding game of the 1999 ALDS where Pedro came on in relief and threw six no-hit innings. Pedro on the mound never did much to help Manuel’s Indians.

But now that they are getting to know one another, the feeling has changed… a bit.

“Pedro has a lot of determination. Actually, Pedro is a little bit different person than I thought he was. He’s a mentally tough guy, a gamer, and he’s cocky, but in a good way,” Manuel said. “He definitely knows baseball and he knows how to pitch. He has a tremendous feel for pitching.”

Meanwhile, it’s not farfetched to think that the mid-season acquisition who has pitched in just six games for a 3-0 record with a 3.52 ERA and 23 strikeouts in 23 innings, can elbow his way onto the playoff rotation. Cliff Lee is a given, so too is Cole Hamels. But the other two spots are up for grabs between Pedro, Joe Blanton and J.A. Happ.

The 20 percent swing-and-miss ratio is by far the best on the Phillies’ starting rotation, and only Brad Lidge and Ryan Madson have higher rates amongst all pitchers for the team this season.

It was almost 10 years ago when Pedro Martinez lined up against Roger Clemens in Game 3 of the 1999 ALCS. The hype leading up to that one wasn’t so much that Pedro was starting one of the greatest runs of any pitcher in baseball history, it was that Clemens was going back to Fenway as a member of the hated Yankees.

Of course all that changed before Clemens got his first six outs. After two innings Clemens was roughed up for five runs on six hits and a pair of walks, while Pedro cruised through seven innings of two-hit ball in a 13-1 victory for the Red Sox.

Pedro’s win over Clemens was the high-water mark for the Red Sox until 2004 when they finally broke through against the Yankees and won their first World Series since 1918. More impressive, that game against Clemens and the Yankees came shortly after he came on in relief in the deciding game of the ALDS and no-hit the Indians for six innings.

Wouldn’t it be cool to see him do the same kind of thing this October?

However, that game against Clemens might have been the first time Pedro was matched up with another big-time pitcher. The pair squared off again in the 2003 ALCS where he famously pitched Don Zimmer to the ground during a bench-clearing incident before the old man could rain blows onto the pitcher.

Not saying that Zim had it coming, but, you know, if you want to dance you gotta pay the man… or something like that.

Anyway, Pedro is no stranger to taking the mound in big games and/or against big-time pitchers. He met Clemens three times in the ALCS, beat John Smoltz with a two-hitter in 2005, went head-to-head with one-time Cy Young Award winner Brandon Webb in a 0-0 duel in 2006, as well as games against Randy Johnson (and others) scattered along the way.

Tonight at the Bank is a renewal of those big-time matchups. Call it Cy Old vs. Cy Young when Pedro takes on reigning NL Cy Young Award winner, Tim Lincecum.

This one is pretty intriguing simply because the stage of the careers the pitchers are traversing. This very well could be Pedro’s swan song since he made no secret about his desire to return to a team that had a chance to make a run for a ring. If he gets it this year, he just might call it quits… then again, maybe not. 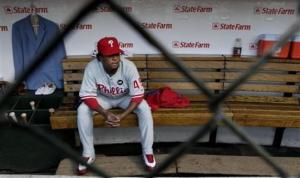 Nevertheless, at 37 Pedro is putting the finishing touches on a Hall of Fame career, while Lincecum just might be at the beginning stages of his. The interesting thing is the pair of right-handers are almost carbon copies of each other with a decade-plus difference in age. Pedro is listed at 5-foot-11 and roughly 180 pounds, while Lincecum is also a slight 5-foot-11 and a wispy 170ish. Back when he was the baddest man with a baseball in his right hand, Pedro threw in the high 90s, broke off a nasty curve, and threw a ridiculous, knee-buckling changeup. And oh yeah, he wasn’t afraid to buzz a hitter or three with a fastball.

These days Pedro throws in the low 90s, still has the changeup, but actually has to pitch more with guile and smarts.

Meanwhile, Lincecum, just like the Pedro of old, throws his fastball in the mid-to upper 90s, mixes in a curve and slider and throws an unconventional changeup that dives like a splitter. As a result, Lincecum was the Cy Young Award winner in 2008 during his first full season in the big leagues at just age 24.

Worse for opponents, Lincecum has the same cold-blooded approach that Pedro had.

“I can’t foresee a guy like Timmy going out in a playoff game and being nervous,” Giants’ centerfielder Aaron Rowand said. “That’s not his persona.”

So look at the matchup as a glimpse into the past and the future.

Beer at the ballpark is $8.75. That’s a lot of money. That’s especially a lot of money when one considers that they made it just down the street from the ballpark. Like literally. That watery, flavorless Budweiser beer is made very near the famous St. Louis Arch – which is very cool, by the way – as well as the main office for Purina pet foods.

Can’t make this up, folks. Doggies and kitties need to eat, too.

Anyway, I haven’t seen too many things here that knocked me over. For instance, I haven’t seen Rollie Fingers yet and I heard he was here. I saw a guy that almost looked like Rich Hofmann, and I gave away my All-Star Game lanyard that held my credential because the nice St. Louis-ian who sold me the faux-chicken sandwich (yeah, eat your bleep, veggie boy!) thought it was cool and asked me for it.

Besides, it was itchy.

I thought Tim Lincecum’s jaunty little cap was neat. So did he, too. After all, Tim Lincecum liked it so much that he wore it to the press conference with the managers and Bob Costas. He even had to endure a wisecrack from that smart-ass Costas, too. You know, something about how it was the same style of hat Jim Bunning wore at the ’64 All-Star Game at Shea Stadium.

So Ryan Howard is coming to hit and he has his high school coach pitching to him. Cameras are popping like strobe lights…