The first time I ever walked into Fenway Park, I thought to myself, “Hey, this is just like Reading, only bigger…”

And older, of course. Fenway Park opened shortly after the Titanic went down in 1912. Reading Municipal Stadium, as it was known when it opened, has been hosting baseball games since 1951. That makes it a relic by today’s standards, but the ironic thing is the movement in stadium building (which ought to be about finished now, right? Doesn’t every city, town and hamlet have its own new ballpark by now?) is to be both old and new at the same time.

Reading appears to have gotten that part right in 1951.

I was the last Philly-area scribe out of the ballpark last night following Kyle Drabek’s 10th outing for the R-Phils, and on the way out I flashed back to a few of those times at Fenway. Walking those empty corridors in search for an exit was reminiscent of a time in 2004 when Jim Thome and I (name-dropping!) did the same thing. See, at Fenway, the visitors’ clubhouse opens right out on the main concourse and the ballplayers have to walk through the same halls the fans traipsed through during the game. So when looking for the way out – me to an elevator to write a story before walking back to the Marriott, Thome to his waiting town car – Thome talked about the ambiance of the joint and I mentioned how it reminded me of Reading, Pa.

Back when Thome played in the Double-A Eastern League, he probably saw the same thing. Just like Fenway, the clubhouses at FirstEnergy Stadium (as it’s called now) open right onto the concourses. The difference is that the ballplayers actually have to wade through the fans in order to get back to the showers and training room. Another difference is that the home clubhouse in Reading is larger than the visitors’ clubhouse at Fenway.

Another difference is at Fenway they sell chowder and lo mein on the concourse. At Reading it’s funnel cake and Yeungling.

Anyway, Reading’s moniker as, “Baseball Town” is well deserved. In fact, the web site Minor League News rated FirstEnergy as the second-best ballpark in the country. The funny thing about that is all the other minor-league parks rated in the top 10 all opened since 2000. To me that should give Reading more points since those other places seem to be attempting to create what FirstEnergy has naturally.

It looks like a smaller, chowder-less Fenway inside, a little like old Memorial Stadium in Baltimore on the outside, which opened around the same time as the park in Reading, but was demolished in 2001. But comparisons aside, the little ol’ ballpark in Reading, Pa. is pure baseball through and through.

For those into the game at its bare essence, it’s tough to beat Reading, Pa. 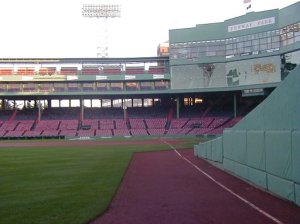 Along those lines, Coca-Cola Park in Allentown is nothing to sneeze at either. Chances are Pedro Martinez will be working in his second rehab assignment this Friday in A-town, so some folks who rarely venture out of the city confines might make the trip up the NE Extension, too.

Which brings up an interesting point…

Here in Lancaster they have an Atlantic League ballclub managed by ex-Cardinal/Twin/Phillie Tom Herr where they play games in one of those nouveau minor-league parks that pop up everywhere like a big box store in a strip mall. Truth be told, it’s a pretty nice way to spend an evening in a place where there are a dearth of truly exciting things to do.

Nevertheless, Lancaster’s ballpark will never be a destination for the hardcore baseball fan simply because there is no reason to watch a game there. In Lancaster, the pro team will never have Major Leaguers in town for a rehab game or the hot prospects around for a summer or two on the path to the big leagues. With no affiliation with a big league club in a city that could very well support a Double-A club, the team is filled with guys just hoping for one last chance or just playing for the love of the game.

Nothing wrong with that.

But it doesn’t make for quality baseball. Sure, the majority of folks don’t go to baseball games for the quality of the game, but, you know, I do. And there are other seamheads out there into the same thing.

Quality… why is that so difficult a concept to accept these days? And that just ain’t for baseball, either. Give people something good instead of a sales pitch and they’ll beat down the door.

Selected in the 11th round of the 1983 draft, Doug Drabek was the property of four different organizations before his son Kyle was born in 1987. In fact, Doug’s rights were held by the Twins, White Sox and Yankees before he made his Major League debut.

So it’s kind of interesting that the son of the 1990 NL Cy Young Award winner and first-round draft pick of the Phillies in 2006 is in such an interesting spot. Kyle’s dad was once the proverbial player-to-be-named-later. No one ever coveted Doug Drabek as a minor leaguer until he actually got to the big leagues and proved he could pitch.

And pitch he did.

From 1988 to 1993, Doug tossed at least 219 innings and averaged 245 innings per season, counting the playoffs. He also never missed a start during that six-year span, won 71 games and finished in the top 5 in the Cy Young balloting three times.

The older Drabek was The Horse of the rotation that Charlie Manuel always talks about. He was the type of pitcher that gave the manager, pitching coach and bullpen a break every five days.

Now here’s where it gets interesting – when Doug Drabek was his son’s age (21), he was dealt from the White Sox to the Yankees organization and got a promotion from Single-A to Double-A. The following year (1985), Drabek spent the entire year in Double-A before starting ’86 in Triple-A for a handful of games.

At age 24, Doug Drabek was in the big leagues for good. For six years of his 12-season career he was one of the best pitchers in the National League, though hardly a Hall of Famer. After he signed a big free-agent deal with the Astros, Drabek won just 42 more games in the big leagues and by 1998, the career was over.

For the sake of argument, let’s say Roy Halladay pitches until he is 35. That means he has three more years to go, which, if history (the Phillies, family and natural development) is an indicator, three years should be the time when Kyle Drabek is in the big leagues for good.

That is if he stays healthy long enough to make it to the big leagues.

Comparisons between father and son are inevitable. Why not … it’s easy. The apple doesn’t fall far from the tree, they say, and besides, Doug Drabek was a really good pitcher until the end. However, it seems as if the only thing the Drabeks have in common when it comes to pitching is that they both are right-handed and have the same last name.

Otherwise, Doug Drabek was crafty. He struck out a bit more than five hitters (5.7) per nine innings in the Majors and had roughly the same ratio (5.4) in the minors. Doug was efficient as a pitcher. He threw a sinker and made the most of his pitches. Even when he was racking up more 250 innings per season, Doug never averaged more than 109 pitches per game.

This season Kyle Drabek has 118 strikeouts in 122 innings. He’s has a big fastball which he used to rack up 74 whiffs in 61 2/3 inning in his first crack at advanced Single-A for Clearwater. More importantly, the injury issues seem to be behind the 21-year-old and he made the transition to Double-A rather seamlessly.

In other words, the kid knows how to pitch. So much so that Manuel didn’t compare him to his dad, but to another hard-throwing right-hander…

“It’d be tough for me to trade Drabek,” Manuel said. “I like Drabek because he’s strong in his legs and his hips and he’s a drop-and-drive kind of pitcher. I’m not a pitching coach but I like his mechanics and I like where he comes from and he’s a strong-bodied kid, like a Tom Seaver type or a Bartolo Colon, and he’s got that kind of stuff. And he’s young, and I think he has a big upside to him.”

But Roy Halladay… name three pitchers in the big leagues that are better than him. If Manuel wants The Horse, there he is. In fact, Halladay could get traded to the National League tomorrow and still likely get votes for the AL Cy Young Award. If Halladay were to join the Phillies and spend the remainder of his contract in Philly, a three-peat is not an unreasonable thought.

So here it is – what should the Phillies do?

• Bank on a can’t-miss kid with the pedigree and big right arm.
• Go for the short-term glory because titles come twice in 126 years in these parts.

Certainly they are tough questions and one that might keep general manager Ruben Amaro Jr. awake at night. But is there a wrong answer? Is this a damned-if-you-do/damned-if-you-don’t situation?

Anyone have a crystal ball?