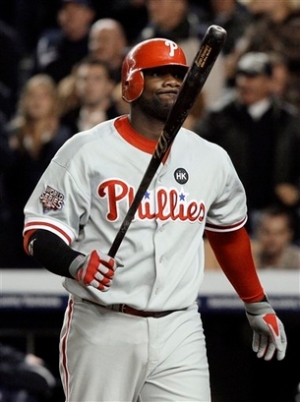 NEW YORK—In 1983, Mike Schmidt had one of those playoff series that people remember forever. In four games against the Dodgers in the NLCS, he very well could have been the MVP if ol’ Sarge Matthews hadn’t hit three homers and driven in eight runs in four games.

The fact of the matter is that Schmidt and Lefty Carlton single-handedly won Game 1 with a homer in the first inning of a 1-0 victory. All told, the Hall-of-Fame third baseman went 7-for-15 with five runs, a pair of walks and a .800 slugging percentage.

Statistically speaking, the 1983 NLCS was far and away Schmidt’s best postseason effort.

The thing is no one remembers how good Schmidt was in the 1983 NLCS because he was so awful in the ’83 World Series.

So it’s kind of odd that he followed up the success against the Dodgers with one of the worst showing by a Hall of Famer in World Series history. In fact, take away the 0-for-21 effort by Brooklyn’s Gil Hodges in the seven-game defeat to the Yankees in the 1952 World Series, and Schmidt’s 1983 World Series could go down as the worst by a superstar.

Schmidt went hitless in his first 13 at-bats with five strikeouts in the series against the Orioles. Had it not been for that broken-bat bloop single that just made it past shortstop Cal Ripken’s reach, Schmidt would have gone 0-for-20 in the series.

Not quite as bad as Gil Hodges in 1952, but pretty darned close.

After wearing out the Dodgers to get the Phillies to the World Series, the Orioles had Schmidt’s number. There was the hit against Storm Davis and a bunch of oh-fers against Scott McGregor, Mike Flanagan, Sammy Stewart, Jim Palmer and Tippy Martinez.

Schmidt had no chance.

Kind of like Ryan Howard against the Yankees in the 2009 World Series,

Just like Schmidt, Howard wore out the Dodgers in the NLCS with eight RBIs and four extra-base hits out of the five he got. Moreover, with six walks, Howard reached base in 11 of his 21 plate appearances.

Mix Howard’s NLCS with his performance in the NLDS, and it truly was an epic postseason. With an RBI in the first eight games of the postseason, Howard tied a record set by Lou Gehrig. Then there was the career-defining moment in the clinching Game 4 of the NLDS where trailing by two runs and down to their last out, Howard blasted a game-tying double to the right-field corner.

After the Rockies took the lead in the eighth inning, Howard paced the dugout during the top of the ninth and calmly told his teammates to, “Just get me to the plate, boys.”

But will anyone remember the RBI streak, the production in the NLCS and that clutch at-bat in the ninth inning of the NLDS after the World Series Howard had?

Better yet, how does Howard get people to forget about the World Series?

Needless to say it will be difficult. After all, Howard whiffed a record-breaking 13 times in six games. He managed just four hits and one, stat-padding homer in the final game. Until that homer, Howard had just one RBI. After piling on 14 RBIs in the first eight games, Howard got one in next six games before that meaningless homer.

“Sometimes you’ve got it and sometimes you don’t,” Howard shrugged after the finale.

Actually, the Yankees had Howard’s number largely by scouting the hell out of the Phillies for most of the second-half of the season. So what they saw was that the best way to handle Howard was with a steady diet of left-handers. Howard batted .207 with just six homers against lefties in the regular season so that was the strategy the Yankees used.

Against the Yankees, Howard faced lefties in 18 of his 25 plate appearances. And against righties he didn’t do much better by going 0-for-6. Charlie Manuel calls Howard, “The Big Piece,” and clearly the Yankees saw the Phillies’ lineup similarly.

Schmidt said the one thing that bothers him the most about his career was his 1-for-20 performance in the 1983 World Series. If that’s the case for Howard, he has been as candid about it—of course he doesn’t have the luxury of time and space to properly analyze his showing.

“I feel cool,” Howard said. “The only thing you can do now is go home and relax and come back for spring training.”

To me, there has always been way too much aggrandizing about Opening Day in baseball. Opening is just the first of 162 and rarely has any true impact on the season. Better yet, unless it’s totally extraordinary, Opening Day is never memorable. There is no significant action.

But the last game of the season – that’s when the memories are made. Game 162 is the time for heroes and for the real pros to step into the spotlight. Even when teams are just playing out the string, the last game of the year is like running that final 385 yards of the marathon.

Anyway can do the first 26 miles, but it’s that last stretch where legacies are defined.

As a kid I also romanticized about the last game of the year and suffered the wide-eyed, Field of Dreams-types during Opening Day. I was more interested in the guts of the action and not the first few easy strides of the race, which meant I spent all summer figuring out what it was going to take for a team to make the last day the most important one.

Sometimes I got lucky, too. I can recall being at the Vet for Game 162 in 1991 when David Cone of the Mets struck out 19 against a Phillies club that featured Doug Lindsey and Braulio Castillo. In fact, Cone had a shot to tie the all-time record for strikeouts in a game after he whiffed the first two hitters to start the ninth inning. But Wes Chamberlain doubled and Dale Murphy – a player who lead the National League in strikeouts three times and ranks 13th on the all-time whiffs list – grounded out to end the season.

The Vet seemed empty that day with most of the crowd holding Walkmen to listen to the Eagles’ early-season loss at Tampa Bay with Brad Goebel at quarterback, but when Cone had a chance to tie the record it was the loudest the fans were all day.

I also was at Memorial Stadium in Baltimore on the final day of the 1982 regular season where the Orioles nearly pulled off a stunning comeback to win the AL East. Trailing the Milwaukee Brewers by three games heading into the final, four-game series, the Orioles won the opener with Dennis and Tippy Martinez on the mound, and swept a Saturday doubleheader by a combined score of 18-4 to make the last game of the year a do-or-die situation.

Any good Milwaukeean can tell you what happened in that Sunday finale.

Ben Oglivie made a sliding catch on the gravel warning track in left, Robin Yount pounded two homers off Jim Palmer by the third inning, and Don Sutton mesmerized the Orioles for eight innings in Earl Weaver’s last game as the Brewers went on from there to an improbable playoff run.

And I was there.

I’ll be there on Sunday when the Phillies attempt to pull off what the Orioles could not in 1982. Trailing the juggernaut New York Mets by seven games just two weeks ago, the Phillies go into Game 162 all tied and with a chance to make it to the playoffs for the first time since 1993. There is no doubt that the day will be filled with craziness of the type that we will discuss for years to come.

This time, though, I won’t be sitting near folks more interested in listening to out-of-town football scores or packed in tight in the left-field bleachers at long since torn down baseball parks. This time I’ll get to see the protective plastic sheeting that had been secured into place late last night when the Phillies took over first place (for less than 24 hours) lowered to stop champagne spray. Or maybe I’ll see ballplayers cry over the missed opportunities of a season stopped too short.

But then again, maybe I’ll see a team prepare for Game 163 on Monday to settle the season in winner-take-all fashion.

Either way, this is a lot more exciting than any Opening Day could ever be.