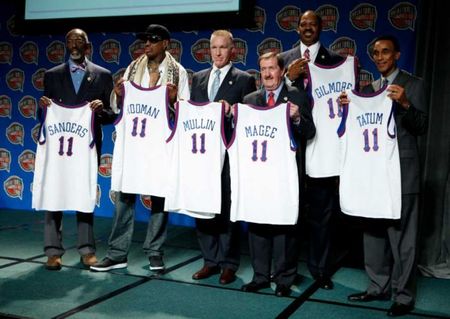 Word spread around the camp like a brush fire. As soon as one kid at the Wally Walker basketball camp at Millersville University heard the news, it was all the true believers could do to contain themselves. After all, they had seen it before. They had seen the magic and knew that it was real.

This guy can stand all the way on the other side of the court and take a normal shot and it will go in. He bounces it in! He takes a shot and it bounces in!

Truth is I couldn’t quite wrap my head around it. How could a guy shoot a shot from the opposite foul line and bounce it in? No, not bank shot, but a bounce shot. From 80-feet away.

But who was the guy? Some coach? Some coach we had never heard of because in our little world of kids off at sleepaway basketball camp in the early 1980s, we thought only of the big time. It was Wally Walker’s camp and he already had two NBA championship rings with Portland and Seattle, was MVP of the ACC Tournament for the University of Virginia, a top five overall draft pick, and was washed up all before the age of 30.

So we waited for Marc Iavaroni from the world champion 76ers and watched demonstrations on how to best score points. Wally Walker ran an offense camp for us junior high kids, probably because everyone likes scoring and shooting. No, not everyone can score or shoot—even some of the best players out there struggle from time to time, but what we were about to see was someone who really liked to shoot and probably could do it better than any person on the planet.

Herb Magee was the best shooter I had ever seen hold a basketball. That’s the way it was when I was in sixth grade and I imagine Herb can still stick them from any spot on the floor. In fact, I’ll be willing to wager that Herb Magee, the coach for Philadelphia University with more wins than any college coach who ever lived, can bounce one in from the opposite foul line.