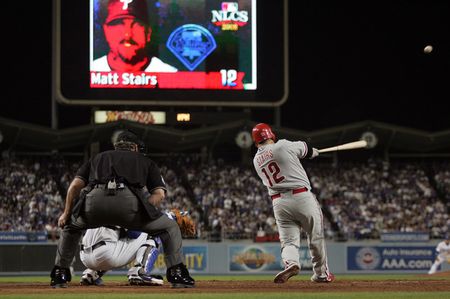 PHILADELPHIA — Once upon a time, back in the late 1980s when you were much younger, thinner and had your whole future in front of you, the Montreal Expos had a base-stealing third/second baseman named Matt Stairs. He was a hockey player from St. John, New Brunswick who left high school for Canada’s National Baseball Institute in Vancouver, not exactly a hot bed for baseball talent, but it was a chance for Stairs to travel around the globe and play ball.

By 1988, Stairs was a member of the Canadian Olympic team and then signed as an undrafted free agent with the Expos. Twenty-three years later, in Washington, D.C., Stairs’ baseball life has seemingly come full circle. The Washington Nationals, the latest incarnation of the Montreal Expos, designated Stairs for assignment. At age 43 after playing for 13 different major league teams, Stairs could be at the end of his playing career.

That’s a big could, of course. This past April Stairs said he wants to keep on playing until the phone stops ringing and teams no longer call. After that, he wants to keep on coaching hockey in Bangor, Maine and maybe even coach or manage in the big leagues.

But that’s only if no team wants a power hitting lefty for the bench.

Certainly Stairs catching on with some team remains a possibility, but in the meantime there are a few things to think about when putting his career in perspective. For instance:

Yeah, that's right… Stairs was a second baseman who swiped bases in the minor-league system for the Expos. In fact, during the 1991 season when he was playing for Double A Harrisburg, Stairs was the Eastern League MVP when he hit 30 doubles, 10 triples, 13 homers and 23 stolen bases.

Let that soak in a second—10 triples and 23 stolen bases.

Could you imagine Stairs as a second baseman during his playing career? How about when he was playing with the Phillies?

But what if he had been an outfielder from the jump? None other than Bill James, the godfather of statistical analysis, suggests that Stairs very well could be winding down a Hall of Fame career:

Look at it. Somebody decided he was a second baseman, he tears through the minor leagues, gets to Montreal, the Expos take one look at him and say, 'He's no second baseman, get real.' He bounces around, goes to Japan, doesn't really get to play until he's almost 30, then hits 38 homers, slips into a part-time role and hits 15-20 homers every year for 10 years in about 250 at-bats a season. … You put him in the right park, right position early in his career … he's going to hit a LOT of bombs.

Moreover, James also dug up this:

Stairs's career numbers are essentially the same as Reggie Jackson's (.262, .356, .490). All of his numbers trump those of Roger Maris. Other players with comparable numbers include Bobby Bonds, Frank Howard, Dwight Evans, Dale Murphy and Greg Luzinski. Nobody confuses those ballplayers with the ordinary.

It wasn’t until the last years of his minor league days that Stairs was moved off second base, largely because of his lack of fielding prowess. However, Stairs’ base-stealing ability also seemed to go away when he moved out of the infield. As a result, Stairs’ minor league stats make it look as if he underwent some sort of personality metamorphosis noting that he had 30 stolen bases in 19 big league seasons and 77 stolen bases in parts of eight minor league seasons. He also played just one major league game at second base, which came in the last inning of a blowout loss in Arizona when Stairs was playing for the Cubs.

Incidentally, Stairs played for the Cubs 10 years and 10 teams ago.