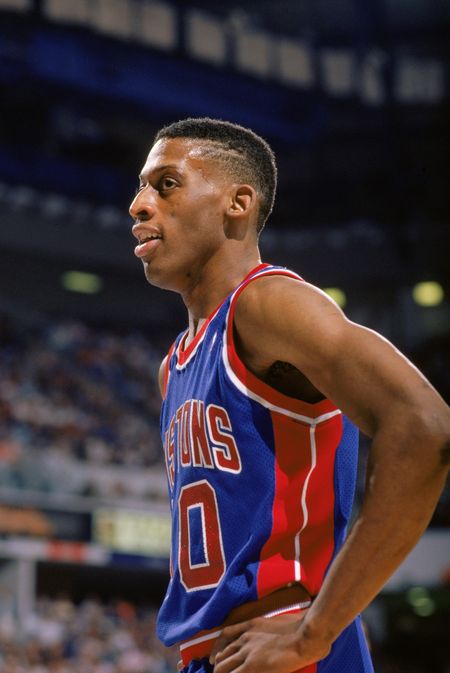 It’s kind of ironic to note that Dennis Rodman was a second-round pick of the 1986 NBA Draft. The fascinating part about this that in the most doomed draft in history, some unknown dude from some college called Southeastern Oklahoma State University would go on to have the best NBA career.

To look at the 1986 NBA Draft in the moment was to see the deepest and most talented collection of players assembled at one specific time and place. And yet between the death, personal destruction, addiction and the misplaced expectation, the entire group seems linked as if some sort of perverse Shakespearean tragedy.

How could so much go so wrong for so many people?

Just look at the list of names of young men who were headed for the NBA during June of 1986. At the top of the list were Brad Daugherty and Len Bias. Daugherty, of course, was supposed to be drafted by the 76ers, but, as the legend goes, former team owner Harold Katz had the No. 1 pick over to house to play some hoops on his indoor court and thought he was, “soft.” Because of that, Katz traded the rights to Daugherty, Moses Malone and Terry Catledge, the draft picks that turned out to be Georgetown/UNLV product Anthony Jones and Harvey Grant, only to get back Roy Hinson, Jeff Ruland and Cliff Robinson.

It very easily was the worst day of trading by the Sixers, ever, and that’s before we figure in the fact that Daugherty averaged 19 points and 10 rebounds a game for his entire career.

The story of Bias, of course, we all know all too well. Of course the one part of Bias’ death that is often overlooked in the long form pieces and documentaries is that without him, the Celtics were in disarray for a solid decade. Moreover, his death also sacrificed significant chunks of the careers of Larry Bird and Kevin McHale, whose declines came much quicker than if they had Bias to lean on.

There were others, too. The No. 3 pick, Chris Washburn, lasted just 72 NBA games over three seasons and struggled with addiction for more than a decade. Big East superstars Pearl Washington and Walter Berry turned out to be casualties of the east-coast hype machine, while top 10 selections Kenny Walker, Roy Tarpley, Brad Sellers and Johnny Dawkins, had middling careers in the league, at best.

Even some of the players drafted behind Rodman were met with tragedy. Drazen Petrovic was killed in a car accident on the Autobahn nearly a decade before his posthumous induction into the Hall of Fame. Three years ago, Portland’s big man Kevin Duckworth died of congestive heart failure at age 44.

The 1986 Draft was so bizarre that one of its best standouts, Arvydas Sabonis, had to wait for Glasnost in order to make his way to America almost 10 years after he was taken as the last pick of the first round. By the time he got to the league he was already at the end of his prime and had many wondering what might have been.

But then that’s the overreaching theme of the entire mix from ’86.

So this was the backdrop from which Dennis Rodman entered the league. Moreover, given the demons he battled off the court it’s amazing that the one player from that draft to play a complete career and then gain induction to the Naismith Memorial Basketball Hall of Fame is The Worm, Dennis Rodman.

According to reports as well as Rodman himself, the 6-foot-7 defensive and rebounding specialist got the votes needed amongst the 12 finalists to gain enshrinement. Word is Tex Winter also will be a Hall of Famer, along with Chris Mullin and former Sixers player and coach, Maurice Cheeks. Philadelphia University head coach and shooting guru, Herb Magee, was one of the 12 finalists. Considering Magee has more wins in NCAA basketball than any coach in history, he has a pretty strong shot to get in, too.

The official announcement is scheduled for noon on Monday.

Nevertheless, the election of Rodman is what most folks will talk and debate about until his enshrinement. He’s one of those players whose career stats both work for and against him. Sure, he led the league in rebounding average seven times, grabbed more than 13 per game over 14 seasons and owns five of the best eight rebounding seasons in the modern era, with the other three posted by Hall of Famers Malone, Kareem Abdul-Jabbar and Elvin Hayes. Rodman was the defensive player of the year twice, all-defense first team seven times, a two-time All-Star and a five-time NBA champ.

If defense, rebounding and championships matter, Rodman’s penchant for doing the dirty work should be enough to get him in. With Detroit and Chicago, teams that were contenders with strong leaders, i.e., Isiah Thomas and Michael Jordan, Rodman was the perfect teammate and ultimate team player.

Rodman was not an all-around player, though. He was a specialist on one side of the court, but when his team had the ball he was largely useless except for fighting for offensive boards. He scored little more than seven points per game and had one season where he averaged double-digits in scoring. In the rare chance that Rodman actually had to shoot a jumper, his form looked like a catapult or slingshot than a pure, smooth jump shot.

Worse, there were two seasons with San Antonio where Rodman’s antics on the floor may have sabotaged the team’s chances at a title. It wasn’t until the Spurs got rid of Rodman and rebuilt the roster—and drafted Tim Duncan—that they won three titles in seven seasons.

“He was annoying,” Spurs teammate and Hall-of-Famer, David Robinson said. “He just would be in your shorts all the time, always there with you. He was a very, very strong guy—a little bit undersized at times, but he never let it stop him. He had relentless energy, and he had no fear.”

It was also around that time when Rodman began his makeover. In fact, he was one of the first NBA players to turn his body into a canvass of tattoos, a now ubiquitous fashion trend in pro sports. He also piled up the technical fouls at an alarming rate and often led the league in that category until Rasheed Wallace came around. But not even Wallace was as combustible as Rodman, who earned fines and suspensions for head-butting a ref, kicking a cameraman, and taking off from the Bulls before a game in the NBA Finals in order to wrestle with Hulk Hogan.

There was even some sort of fling with Madonna.

“I just took the chance to be my own man … I just said: ‘If you don’t like it, kiss my ass.’ Most people around the country, or around the world, are basically working people who want to be free, who want to be themselves. They look at me and see someone trying to do that… I'm the guy who's showing people, hey, it's all right to be different. And I think they feel: ‘Let’s go and see this guy entertain us.’”

But unlike his gritty work on the floor and glass, Rodman’s sideshow antics and outbursts seemed contrived and even a bit phony. Despite his rebellious image, Rodman seemed used up and on some sort of money grab with books and appearances in wedding dresses or shotgun marriages in Vegas. People who didn’t know anything about basketball knew who Rodman was and assumed he was better than he really was because of all the media exposure. In reality, it was an act.

It seemed like more than anything Rodman needed attention—maybe even more so than something substantive.

Still, when his head was right and Thomas or Jordan had him focused, Rodman won big games. During the 1996 Finals, he could have been the series MVP by grabbing 20 and 19 rebounds in games 2 and 6 with a record 11 offensive boards in both games. After the series, Seattle’s coach George Karl said Rodman won those two games all by himself.

It would be nice if Rodman is most remembered for how he played or the fact that he grabbed more available rebounds than any player in NBA history. He could play when he wasn’t distracted or had some other outside motivation and distractions. When he had his uniform No. 10 retired by the Pistons last weekend, Rodman admitted he could have been better. During the press conference at the ceremony in Detroit, Rodman said he “didn’t deserve to have the number retired” since he could have done so much more.

“I didn't fully understand the value I had for this organization,” he said.

Was he valuable enough to warrant election to the Hall of Fame? Apparently so.

Could he have been even better?