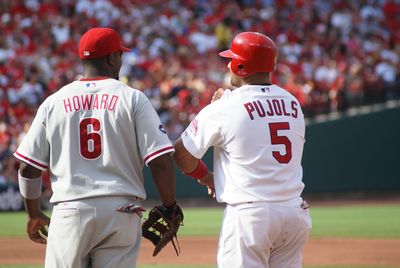 What if the Phillies traded both Kyle Kendrick and Jamie Moyer to the Mets and got back Johan Santana? Huh? How's that one grab you?

Alright, that doesn't sound fair. Let's say the Phillies throw in some cash, too. Why not? Maybe then they could flip Santana to Seattle to get back Cliff Lee.

Then we'd be getting somewhere.

Look, as far as outlandish and ridiculous ideas go, the Kendrick, Moyer, cash, and Santana for Lee deal I just proposed is not any crazier than the one ESPN put out there when they floated the always mysterious "sources" rumor that had the Phillies dealing away Ryan Howard to St. Louis for the game's greatest player, Albert Pujols. Actually, my idea is a lot less crazy than the Howard-for-Pujols bit because at least it makes sense. No, neither deal is ever going to happen.

In fact, Phils' general manager Ruben Amaro Jr. called the very notion of it, "irresponsible," on the record to Insider, Jim Salisbury.

But what the hell… at least my idea is reasonable.

You see, to a team like the Mets — one that stinks and is going nowhere, post-haste — a pitcher like Santana is a luxury. Better yet, it's like living in a trailer park with an Escalade parked out front. Those are some mixed up priorities and financial irresponsibility. If the Mets can remove Santana's salary quickly, it would be wise.

That doesn't mean they'll do it, though. Wise and baseball GMs are two terms that rarely appear in the same paragraph, let alone right next to each other.

Kendrick makes barely above the minimum and Moyer gets a nice salary so that's what the cash is for. Essentially, the Phillies would be doing the Mets a favor in all aspects. And since the Mariners appear to be spending some cash and rebuilding their roster, maybe they’ll go for the Santana for Lee deal, too.

See how easily that came together? Now someone take me to Bellevue. I want the ESPN suite/

Oh yes, there are many reasons why the Howard-Pujols idea is nuts, and most of them are quite obvious. Yes, Howard was born and raised in the St. Louis suburbs and is revered like a hometown hero. When the season ends Howard goes home to Missouri to hang with his friends and family and uses his home base for his off-season workouts before heading to Florida.

Here’s the thing about that… Pujols is from Missouri, too. Sure, Howard is a hometown hero, but Pujols is a hometown god. Not only is he the best player in the game right now, but he might be the greatest Cardinal ever, too. That’s saying something since Stan Musial (the man who should have gotten the same hero worship and publicity for being one of the greatest hitters the way Ted Williams has) is synonymous with the organization. Just nine years into his career, Pujols is poised to own every major hitting record if he doesn’t get bored with it all. Last spring after the Cardinals visited Clearwater for a Grapefruit League game, I asked hitting connoisseur Charlie Manuel his take on Pujols and he dropped a line on me like he was Yoda or something.

Yes, that was the manager’s way of saying Pujols can do it all.

Look, we know Pujols is really, really good. No needs Charlie Manuel’s explanation to see that. Just watch the guy, for Pete’s sakes. If there is one snake the is out of the can of peanut brittle it’s that maybe the idea of trading Howard (and Pujols, too) means the Phillies see a day when they won’t be able to afford him. Coincidentally, Howard and Pujols have contracts that expire after the 2011 season. By then, of course, both men could have another 100 home runs and 300 RBIs tacked onto their stat sheet.

Even scarier, both players will have their Hall-of-Fame credentials stamped and ready for induction despite the fact that they will just be coming into their athletic prime. Imagine that… born months apart in 1979 and 1980 (Pujols is two months younger), both sluggers are on an unprecedented path and they just now are beginning to enter their prime.

But with that kind of talent comes a high price. Howard gets $19 million in salary this year and $20 million in 2011, while Pujols gets $16 million for the next two years. In fact, he’s not even the highest paid player on his team.

Sure, Pujols already has more money than he’ll ever be able to spend, but there is pride, ego and all of that stuff. Maybe at the end of his deal Pujols will want to cash in for all the years he was a relative bargain for the Cardinals. Shoot, if Howard is looking for a deal in the A-Rod range (an average salary of $27.5 million over 10 years), what’s Pujols worth?

Does the treasury even print that much money?

Now try this out—and understand we’re just riffing here… maybe the Phillies might believe that if they have to pay upwards of $30 million per season for one player, why not go all in and get the best guy out there. Hell, if you’re already spending $30 million, what’s another $5 million?

Could that be the logic in all of this?

Who knows? Chances are it was just a way to get a few extra clicks on the ol’ web site and to get people talking about baseball again. Certainly there is no harm in that, is there?

Still, the idea of Howard and Pujols both with expiring contracts looming and the potential salary both men could command is quite intriguing. What makes it even more interesting is the notion that if the Phillies can’t afford to keep a guy like Jayson Werth beyond this season, how in the world are they going to be able to afford Howard and/or Pujols?

1 thought on “Oh, so you want to talk about crazy trades…”