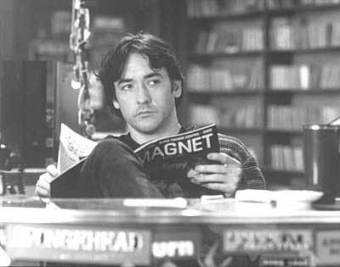 There is a line in the movie High Fidelity (it’s probably in the book, too) where John Cusack’s character, Rob, defends the highly refined tastes of he and his pals Barry (Jack Black) and Dick (Todd Louiso) by declaring that they are “professional appreciators.”

Isn’t that a nice sentiment? An appreciator… that’s like a fan only better. An appreciator accepts the effort and understands nuance. They search for the sublime and revel in it whether it’s a tiny strummed chord of a guitar, an understated sense of style or an unspoken acknowledgment.

It’s kind of like that scene in Pulp Fiction where Winston Wolf turns and gives Jimmy a quick nod after the first sip of coffee that was crassly called the “gourmet [bleep]” by Jules.

I’ve always believed that the success of something like “American Idol” was because Americans, generally, are not appreciators. Instead, we enjoy watching the failure of others. We enjoy feeling like we are better than others and laugh at people when they put themselves out for public consumption and fail.

That combined with spiraling, out-of-control credit card debt, low-brow culture and all-you-can-eat buffets are what Americans do better than almost anyone else.

I’d say Americans do sports and sports fandom better than any nation in the world, too, but that would just be crass jingoism. The fact is that most of the world has caught up with us in athletics, but then again I usually just base this notion on how well the U.S. team performs in Olympic basketball. Charles Barkley said prior to the 1992 Olympics in Barcelona that the U.S. can play basketball and drop bombs better than any country in the world. Sadly, I don’t Sir Chuck’s boast holds up any more.

But it appears as if Charles is singlehandedly proving the buffet theory.

Nevertheless, the rest of the world has seen our version of football and baseball and, frankly, they aren’t very impressed. American Football, as it’s called everywhere else, appears to be the one sport that captures no imagination whatsoever. They all have their own football and all the ancillary stuff that go along with it, thank you very much. In fact, a good old soccer hooligan makes the standard 700-level Eagles’ fan look like a choirgirl.

Certain soccer fans actually are detained at the border when attempting to enter most foreign countries. The fear is that if soccer fans go to, say, Belgium, an international incident could occur, leaders will stop talking to one another and the Euro will drop lower than the dollar.

All that for what? Soccer?

Meanwhile, certain Eagles fans are sometimes prevented from purchasing more than two $8 beers at a concession stand at the Linc. As a result, Joe Banner won’t be able to make the numbers work on the spreadsheet and the team won’t be able to afford that much-needed wide receiver.

So drink up, folks, but do it with a certain decorum. That means when you are sitting at the tax-payer funded football stadium, compress your opera hat and put away the monocle before attempting to dry heave on the patron in front of you.

After all, we are a society and the team needs that special receiver with the ability to dig out passes thrown to the shoe tops.

But you know what else we can do better than anyone else? We can wax on about baseball. Yes, it’s true. It’s also true that there are companies that exist solely to produce that saccharine sweet baseball-as-a-metaphor-for-life bullbleep. You know, that NPR/Field of Dreams tripe about ghosts walking out of the corn or holding your dad’s hand as you walk into Fenway or something like that. Man, it just makes me want to throw up.

Why, you ask (or even if you didn’t I’m going to write it anyway)? Perhaps it’s because the reality of life has made a bigger impression than the fairy tale. For instance, my first exposure to baseball came at Veterans Stadium and Memorial Stadium in Baltimore. At the Vet the design was so bad that nearly every seat in the house sucked. I can remember walking in there for the first time in 1976 and thinking that we’d be better off watching the game at home on TV – at least then I’d be able to see what the players looked like. At least then I wouldn’t have some jackass spill beer down my back as I nursed a nose bleed brought on from the altitude of the crappy seats.

Or in Baltimore, a neighborhood stadium with sardine-styled parking, National Bohemian beer ads everywhere, and drunk cab driver on the dugout leading the cheers for the weeded crowd that needed to yank out the ganja one last time so that the he would be numb for when the police billy clubs rained down on him after being tackled for running out on the field.

You’re crazy if you think going to places like that doesn’t have an affect on a kid prone to over-thinking everything.

Even now it seems as if baseball is personified by odd behavior. Like Billy Wagner exposing himself after being asked about throwing a slider or Brett Myers just being Brett Myers.

The truth is I prefer the reality to the produced fairy tales. I appreciate it. Just like the put on part – you know, the crap about how time starts on Opening Day – the truth is so different from real life. Accepted behavior and norms are pulverized with a fungo and no one goes to jail for it.

Who doesn’t appreciate that?

A few years ago the Vet was closed and mercifully blown up. Personally, I think the park got off easy. I would have preferred torture instead of implosion, but it all worked out in the end. Nevertheless, Yankee Stadium is closing at the end of this season and already the odes are hitting the ether. Here, Tyler Kepner of The New York Times gets into the off-limits areas of The Stadium.

Ron Guidry played the drums before taking the mound? Cool.

Meanwhile, The Times has a whole page for Stadium stories.

Also in New York, former Phillie (and all-around solid dude) Nelson Figueroa’s Quixotic or Coste-ian (yes) journey across the globe to find work as a baseball could end with a gig in the Mets’ bullpen. If Figgy doesn’t start the season at Shea, it could be New Orleans, which, obviously, is better than Taiwan.